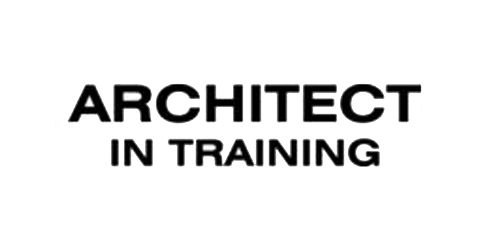 How to Become an Architect

Now that I can finally use the word architect to describe what I do, after completing the AXP (it was called IDP when I did it), the ARE (Architect Registration Exams), and becoming licensed — a process that took me about 6 years to complete, I am really proud to call myself an architect.

It was a long road to become an architect, starting with a 5 year professional architecture degree, a post-professional degree (3 years more for a degree I didn’t have to do but wanted to do because I’m a nerd), 3.5 years of working for architects (took me more like 5 years to get all the hours in specific areas like construction administration or cost estimates), and passing 7 individual exams that were 3-5 hours each – so yeah it’s a lot.  Granted I could have completed the task before I was 36, but that’s actually pretty close to the average timeline, its better late than never.  You can check out NCARB by the Numbers for more info on time to licensure, it is getting shorter, in 2016 33 was the average age of licensure for new architects.  There are people who never get licensed, so I am grateful for the opportunities that I have had, especially during the hard times of the economic downturn of ’08 .  There were some things I wish I had started earlier after graduating with my undergrad.  For one I should have started logging NCARB hours earlier and taking the ARE instead of doing a post-professional degree.  BUT no worries now, I have come through to the other side, and now I am a licensed architect, and I can finally call myself an Architect! So what all goes into this word?

According to the Architect’s Hand Book of Professional Practice, “the privilege to use the title “architect” in any form is specific to a licensing jurisdiction, and an individual licensed to practice in one jurisdiction may not use the title in another until he or she has been granted a license.“

The definition of the practice of architecture from the NCARB Legislative Guidelines and Model Law, Model Regulations:

The  practice of architecture, for purposes of the registration statute, should be defined as consisting of providing or offering to provide certain services hereafter described, in connection with the design and construction, enlargement or alteration of a building or group of buildings and the space within and the site surrounding such buildings, which have as their principal purpose human occupancy or habitation. The services referred to include pre-design; programming; planning; providing designs, drawings, specifications and other technical submissions; the administration of construction contracts; and the coordination of any elements of technical submissions prepared by others including, as appropriate and without limitation, consulting engineers and landscape architects. The practice of architecture shall not include the practice of engineering, but an architect may perform such engineering work as is incidental to the practice of architecture. No person not registered nor otherwise permitted to practice under the registration statute should be permitted to engage in the practice of architecture.

A) person currently employed under the responsible control of an architect and who maintains in good standing a National Council of Architectural Registration Boards Record may use the title “intern architect” or  “architectural intern” in conjunction with his/her current employment, but may not engage in the practice of architecture except to the extent that such practice is excepted from the requirement of registration.

C)   State statutes will continue to exempt various structures and special categories of persons from the purview of the statutes. Planning activities by planners and construction contracts by persons customarily engaged in contracting work are examples of activities which should be specifically exempted.

Basically it says you aren’t allowed to call yourself an architect if you are soliciting business for architectural services in a state unless you are a registered architect in that state.  Now there are many shades of gray to this, because there are plenty of people out there doing design work where an architect is not required.  Usually a builder designing a  house or even an unlicensed architectural designer doing a house design, but in many states if its residential and under 3,000 sq. ft. you don’t need an architect. Usually there is a cut off on where you need an architect, as you can see from the flow chart below, the first question is “Public Building?”, and if it is, then you will need an architect to deal with code issues.  Do you need an architect? It really depends on what state you are in and what type of project you are doing, and how much risk you want to take by not having an architect. 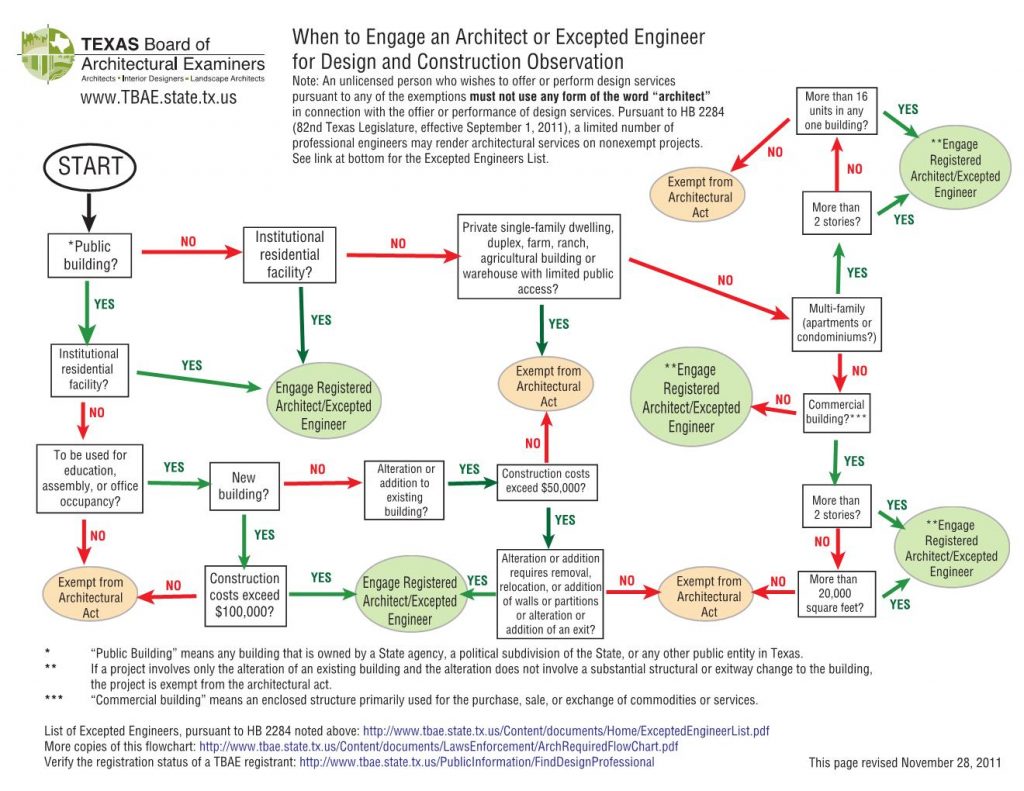 I would say that most people don’t know that at all.  If a layman person sees you carrying around drawings and posting interesting things on Instagram, then they would probably call you an architect.  Remember that a real architect is not just a draftsperson or a designer who prepares house plans. Many such persons call themselves “designers”, “architectural designers”, “home planners”, “residential designers”, “principal”, “owner”, “design director”,  “building designers” and other such titles. [source: https://www.zillow.com/wikipages/Do-You-Need-an-Architect/]

Even before I was an architect, while working in an architecture firm seeing the misuse of the word architect irked me, mainly because I couldn’t call myself that officially, but I would see people misuse it, like with “design architect.”  But surprisingly after reading the Architect’s Handbook of professional practice, you are allowed to call yourself project architect if you are working in a firm and fulfilling that role.  As stated in the AIA’s Architect’s Handbook of Professional Practice: “A firm may list an intern as “project architect,” when “project manager” or some alternative would be more appropriately consistent within the licensing statute.”  (p56, 15th edition). The handbook isn’t super clear on this, but it appears to be true.

There are also many people outside the industry calling themselves data architects, systems architects, software architects, community architects, that was the part that I always felt uncomfortable for me. Anyone who has looked for a job recently has seen that when you type in architecture or architect, you get software or data architect.  Which is cool for them, calling themselves architects, but I wish it wasn’t used so willy-nilly, especially since I worked so hard to get the title architect.  I almost feel like I should capitalize it: Architect.  It was one of those words that people seem to throw around and not really understand that there are some limitations to it the word architect, who can and cannot use it.  Its just that the State boards can’t or won’t enforce it, they only do enforce it when is someone blatantly calling themselves an architect to solicit business for architectural services and they are not licensed.

From the AIA Architect’s Handbook of Professional Practice it states “the general rule is that a term, such as “software architect,” which is highly unlikely to be misconstrued as referring to someone providing actual architectural services, may be disregarded by a board, while other terms may be seen as more suspect.”  So there pretty much goes my argument for that, data and software architects are allowed to call them selves that, whether I think its appropriate or not.

This seems like a missed opportunity to make ARCHITECT a stronger word, where the public knows that if you have AIA, RA or NCARB after your name, only then are you an architect.

Before I was licensed, I used many titles to describe what I do, all to NOT use the word architect or to use the “derivative” of it:

From the Architect’s Handbook: “Interns may use the disallowed title (intern architect or architectural intern) on resumes, business cards, marketing materials, listing on award, or magazine articles.” (p56, 15th edition) They don’t really explain why the term is disallowed, another confusing thing in the text.

I realized after meeting an acquaintance at a party and then meeting him a 2nd time, he thought I was an architecture student, because I was talking about these exams I was engrossed in at the time, and that I had not been fly fishing the whole summer because I was studying (sacrifices). He thought I was a student, oh man had I felt like I was misrepresenting myself.  This was while I was working full time in an architecture office and had been working for 10 years in different offices.  I totally felt like Steve Ramos, when Shame pushed him to get his license.  He discusses trying to tell his barber that he is an intern but does architect things, hilarious!

I do wish that Architect in Training (AIT) would become a more popular term to describe what many junior people in architecture firms do.  Also I think there should be some basic exam for this, that would concentrate on what an architect does in the community, Health, Safety, and Welfare issues, and basic contracts an architect uses. This would be very similar to how engineers do their certification.  They use the term Engineer in Training (EIT) once they pass the FE exam, which is fundamentals of engineering certification, the first step toward getting your P.E., or professional engineering certification.  So having an AIT certification would not be all that strange.

I know the term intern is disappearing in our field, and I think we can replace it with AIT .  NCARB has discarded the term intern, so its just a matter of it being filled with a better title and filtering down into firm culture.  I would suggest AIT, and would require a professional degree and a small certification exam administered by the AIA or NCARB.   Several state boards including Montana, now allow the term Architect in Training to be used. [source: http://www.mtrules.org/gateway/ruleno.asp?RN=24.114.510]

(1) Persons who are not licensed under Title 37, chapter 65, MCA, may use the title “architect-in-training” in representing themselves to the public, as long as such persons:

(a) perform their work activities under the direct supervision and responsibility of a licensed architect;

(b) have obtained the proper degree; and

(2) An architect-in-training must cease use of the title if the person ceases activities or work in pursuit of licensure.

(3) Principals of firms employing architects-in-training may use the title “architect-in-training” as they deem appropriate when making presentations, in promotional materials, etc.

Why the AIA is so confusing?

Another thing that is confusing in the Architecture world is the AIA’s nomenclature of those who have professionals degrees and working under a licensed architect versus those who are registered/licensed architects, the Associate AIA vs AIA.  Nobody but architects under stand this.  Its basically people being confused about the person being an associate of the firm, and most often with an Assoc. AIA they are not an associate of the firm. The term AIT should be used for BOTH AIA and NCARB and member boards.   Again I think “Architect in Training” would make this more clear and show hierarchy and passes the cocktail party rule. “The term AIT passes my “cocktail party rule:” explaining one’s job must be easy. If you are asked what you do at a party and you answer, “I’m an AIT, you know, an Architect in Training,” everyone will understand that you’re involved in the design of buildings, but are not yet an architect.” [source: https://www.ncarb.org/blog/whats-a-name-great-intern-debate]  And hopefully one day soon you can say at a party that you are an Architect.

Its something architects and designers talk about, but I haven’t ever seen official answer on this, and its something that the AIA and NCARB, and the state registration boards are contemplating.  I know this is a sensitive issue affecting (  ARE candidates and AIT’s, but hopefully in the future all those aspiring architects will be Architects in Training, or better yet Architects!

1 thought on “Architect – Use of Title and Architects in Training”